Post-Historicon I have been pondering what projects I will be working on for the rest of 2019 and into 2020.  After spending most of the last couple years on 7TV spy-fi and post-apocalypse, I have decided to return to mainly historical projects.  I have been thinking about this for some time as my interests have been moving back in that direction.  For instance, I bought 2 painted ECW armies at Historicon and have been researching rules options.  I plan on expanding the armies with the large amount of unpainted lead that came as part of the purchase.

A large part of my time will be allocated to painting armies for SAGA.  I am already painting my own Romano-British army, currently on the 3rd of 4 foot units and the mounted are primed.

My friend Steve in Ohio was selling his SAGA stuff recently and last week I picked up another set of Romano-British and a set of Saxons from him.  Each is a 4-point box with some additional unit packs.  I am going to paint both of these with the intention of selling them when completed.  I am going to do the Britons first as I am already in Briton-mode. 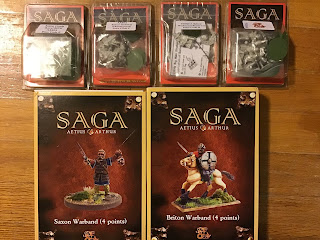 Also arriving last Wednesday were miniatures for 2 longer-term projects.  I backed a Kickstarter in May for a set of post-apocalypse miniatures based on the 1980s RPG Aftermath.  I don't remember ever playing it, but my group did play Gamma World in that long-ago time.  I got 7 giant mutated rats with guns, a couple of rat swarms and 4 humans.  As I wrote earlier, I am taking a break from painting post-apoc so they will go into storage for now.  The bag on the left of the picture is a set of 12 Earth Force Infantry from Rebel Minis.  They were having a sale and I have been looking for some humans that I could use as the garrison of an off-world base for a future Doctor Who scenario.  Apparently they are modified versions of the mobile infantry from the old Starship Troopers miniatures game from Mongoose.  I never played that game but they will do nicely for my purposes.  Quick service from Rebel, I ordered them late Sunday night and had them on Wednesday. 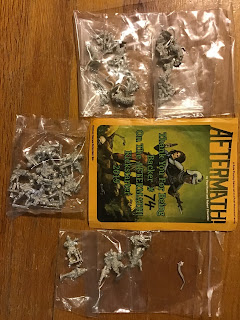