Back in early 2019, I painted a group of nine Hazmat troopers for my post-apocalypse games.  Eight of them are from Hasslefree, sold in two sets of four as Hazmat Teams Alpha and Beta.  The ninth is a character miniature from Crooked Dice which is a bit taller but since it is the leader I don't mind.

When I was thinking about how to paint these I knew I wanted the suits to be yellow.  Yellow is not a color I enjoy highlighting, so I decided to use the Army Painter method of a colored primer.  This was the first, and so far only, time I have used that method.  I wanted to try it out on a uniformed group without too many details that I would have to repaint in different colors.  Also, I happened to have another use for the yellow primer as part of my oil rig project.  So I gave it a try.  After spraying the Demonic Yellow primer, I touched up the spots where the spray did not reach with a bottle of the same color.  After painting the minimal details (weapons, air tanks, visors, etc.) I gave them a quick wash of dark brown and sealed them with Testors Dullcote.  I think they turned out fine for my purposes.  It was a quick way to paint miniatures that are predominantly one color but not a method I would use often. 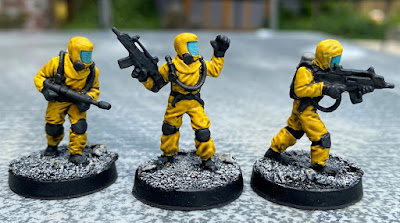 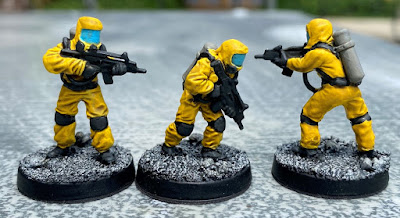 The one in the middle is from Crooked Dice.  Unlike the other troopers, his suit contains his deadly powers inside, as evidenced by his glowing hand.  I have had this miniature for years and finally painted it as part of this group. 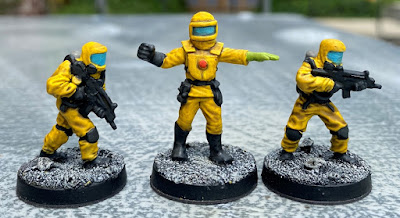 They are ready to purify the unclean.  Beware zombies!