I am a long-time zombie movie fan, ever since I saw Night of the Living Dead, the sequels and Return of the Living Dead on cable tv in my youth.  However I only have two painted zombies which doesn't seem right for post-apoc games.

In late April ago I ordered some gaming supplies from Recreational Conflict to take advantage of their free shipping offer.  While browsing their website I came across the zombies in their Lead Bones range.  I had bought a pack of their clerks in the past and was happy with them.  Two of the zombie packs really caught my eye and I added them to my order.  After a quick delivery I cleaned, based and primed them.  The Lead Bones zombies have a lot of character without having too many small details to paint; things such as partially-exposed skulls, bite marks, etc.  To this group I added 6 plastic zombies from Warlord (originally Wargames Factory).  I bought several sprues for $1 each during one of their sales a few years ago, had put a few together in early 2019, and neglected them since.

Part of my motivation to paint this batch was to try out the jars of Games Workshop contrast paint I had bought in February 2020.  I wanted to try them out on figures that I didn't need for a particular project in case the results weren't good.  I watched several videos to get some tips on how to use them.

I think that my experiment was a success.  I used contrast paints for all the skin, most of the hair, shoes and belts and some of the clothing and thought they shaded well.  There seems to be a little more definition than using a normal wash.  For exposed bone I found the Skeleton Horde contrast to be too dark on the raised areas so I highlighted with Army Painter Skeleton Bone.  I didn't have any problems using both contrast and normal paints on the same models.  Doing a large group allowed things to dry quickly to minimize wait time.  Best of all, I finished all 14 miniatures in 24 hours, starting them Saturday morning and finishing Sunday morning.  I'm not sure about the total time spent painting, but it was low.  They are not my best work, but I don't need that for zombies and I would be happy to use them in a game.

Lead Bones pack 1 (l-r):
Civilian: contrast paints except for the pants.
Priest impaled with cross.  The cross came as a separate piece I superglued in, you could substitute something else easily.  All contrast except the collar and cross.  Reminds me of the priest from the movie Dead Alive.
Police officer: I used normal paints on the uniform to test out a possible color scheme for the unpainted police miniatures I have.
Biker: contrast on skin, belt, shoes and hair.  I want to add a decal on the back of his jacket, but I couldn't find the leftover decals from my biker gang I painted in 2019.  I'll keep looking. 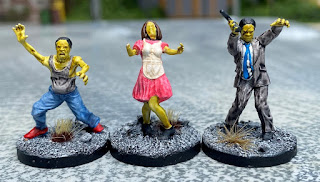 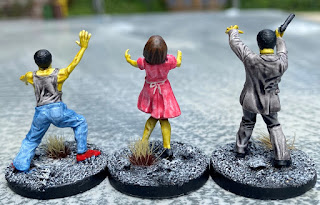 More Warlord Zombies: hospital worker, visitor and patient.  Contrast except for anything white, brains and the visitor's pants. 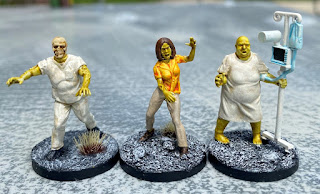 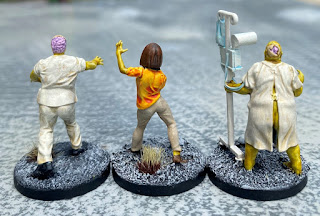 A bonus terrain piece.  While I was painting these minis, I dropped a brush which fell down the back of the armoire I use as a painting station.  It landed on one of the bottom shelves and when I was moving things around to get it out, I found this set of resin barrels.  I have no memory of ever buying it so it was a nice surprise.  The resin seemed different from Acheson which is who I get most of my resin terrain from so an unknown manufacturer. 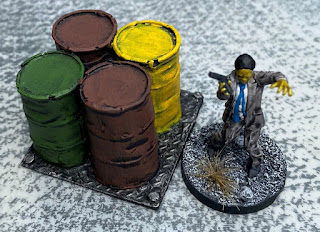