Most of my time in September and October was spent painting an Early Saxon army for Saga.  I did sneak in a batch of post-apocalypse minis to take a short break from the Saxons.

The Marauders are from Battle Valor Games at http://www.battlevalorgames.com/index.aspx

They make 15mm Fantasy and 28mm Sci-fi, Pulp & Fantasy.  Most or all of the 28mm were originally made by Sgt Major Miniatures which went out of business in the mid 2010s.  I had seen their ranges at US conventions but hadn't bought any, though my friend Mike had some.  In June 2020 I found out from Mike that Battle Valor were bringing these ranges back and I ordered a few packs during their introductory sale.  I received them shortly thereafter.

The Battle Valor minis are well-sculpted with minimal flash.  On the chunky side of 28mm, with lots of gear; just how I picture they would look wandering through the wasteland.  I enjoyed painting them.  I have another pack of Waste Marauders with more significant mutations, along with some apes that I will get to someday.  They have some interesting packs including cultists and various armed religious groups.

As I was writing this post I received an email from Battle Valor about their Christmas Sale: 30% off through 16 December.

When I was prepping the marauders, I also got out 4 miniatures from the 2019 Aftermath kickstarter.  They are now on sale at https://puttymonkey.com/shop/ols/all  I never played the Aftermath RPG back in the 1980s, my group preferred Gamma World.  They have clean lines, no flash and good details.  They also make another human survivor (that I didn't get) and giant mutated rats (waiting in the lead pile).

When painting this batch, I tested out my GW contrast paints on non-zombies for the first time.  I also used my normal paints.  I wanted to try a different method for flesh using a contrast wash followed by my usual skintone.  It was faster and I have been using it since.  Overall I am happy with how they turned out and look forward to using them in a game.

Waste Boss in the middle flanked by Waste Marauders (Battle Valor).  The Waste Boss looks like he stepped  out of a Mad Max film. 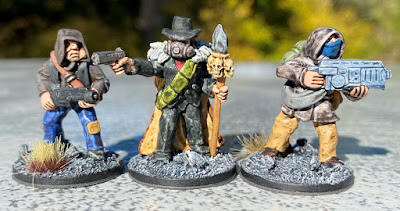 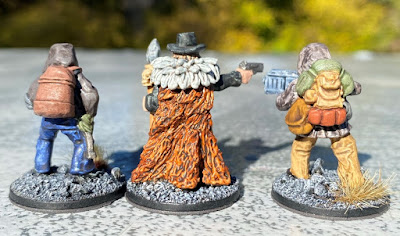 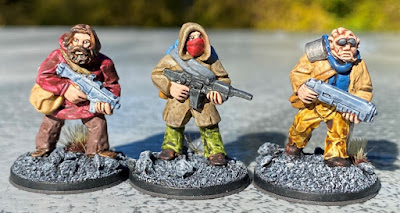 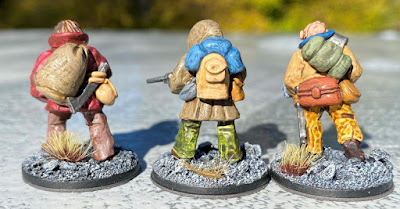 The Preacher on the left (Putty Monkey) and Bounty Hunter on the right (Battle Valor).  I really like The Preacher, he has an Old West vibe and his facial features remind me of Yul Brynner in the Magnificent Seven. 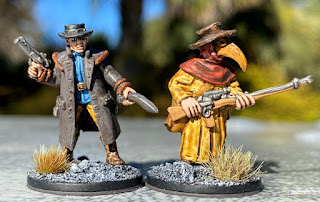 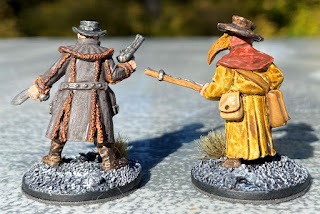 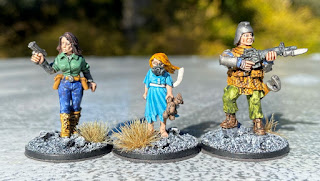 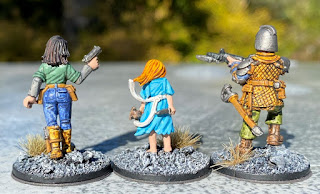 Labels: 28mm, 7TV, Across the Dead Earth, Aftermath, Battle Valor, Post-Apocalypse, Putty Monkey, This is Not a Test