Today's post consists of a batch of 28mm miniatures from Crooked Dice for use in their game 7TV.  I bought them during their not-Salute sale in April 2020 and I painted them during lockdown in fall 2020 when I needed a change of pace in between batches of Early Saxons for Saga.  Their miniatures are generally a pleasure to paint.  These are are all for use in the Spy-fi version of the game, which is my favorite, covering everything from James Bond to Doctor Who.  Crooked Dice is scheduled to release a 7TV:Fantasy set in 2021 if fantasy is your thing. The names in the photo notes are from the CD catalogue.

These are two of my favorite minis from Crooked Dice.  The first time I saw the Tomorrow Person (l) in his late 70s/early 80s outfit he immediately reminded me of the classic horror movie 'Scanners' (1981), in particular the early scene when the evil scanner Revok (played by Michael Ironside) makes a weaker scanner's head explode during a demonstration.  Click Scanners Head Explosion for a video clip and watch the whole movie later.  If you haven't seen it you should.  If you've seen it before, watch it again.  You know you want to!  The prototypical Action Hero (r) is seen in a myriad of 70s-80s action movies.  The only question is whether he will defeat evil with his fist or his gun? 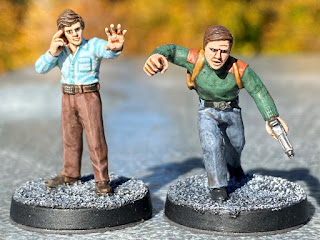 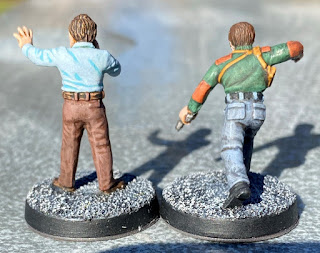 Darius, the Man from 2000 can come with an optional resin base surrounded by floating timepieces.  I got just the miniature, mainly because I did not want to paint all the clock faces..  At first I was not sure how to attach it to a base, since he is 'floating' with little surface to attach and the brass rod I normally use for pinning was too thick..  After getting some suggestions from fellow gamers, I used a pin vise to drill into the base of one foot and also into a slottabase, then cut a sewing pin to the right length and superglued it all together.  I left his eyes blank because I thought he looked creepier that way.  Is he a fraud or are his powers real? 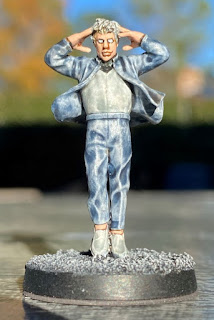 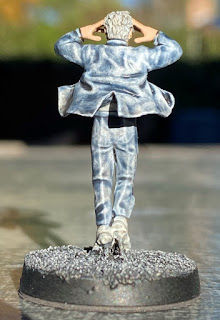 The Crow King (l) is from CD's range of rural horror miniatures.  Think 'The Wicker Man', which I watched again recently and thoroughly enjoyed.  I went through several methods for his all-black outfit, starting with contrast Black Templar.  I didn't like the look it gave over such a large area, so next I applied a coat of black ink.  Last was a drybrush of Army Painter Necromancer Cloak (except for the crow).  The Cultist Dog Handler (r), sans dog in this photo, will go nicely with my collection of attack dogs. 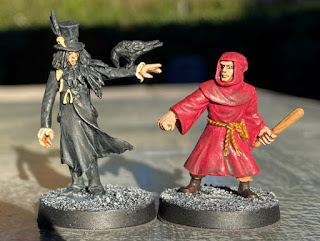 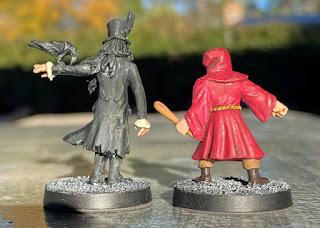 Crime Boss Tony 'King Tut' Tuttle (l) and Detective (r).  I already have a group of criminals and every crime syndicate needs a boss.  Of course, he is in a suit and doesn't get his hands dirty; that is what his lackeys are for. 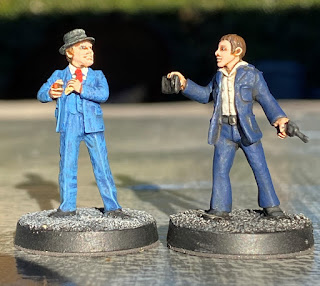 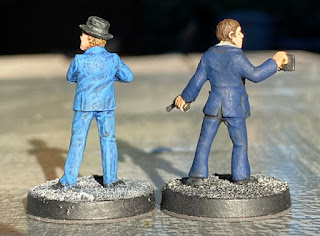 Two more police officers on the lookout for lawbreakers  I painted the one with the pistol a long time ago and think I posted him then, but pulled him out of storage to go with the other police. 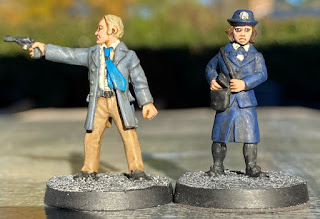 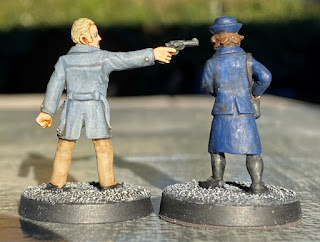