I designed this as a quick and relatively inexpensive army build for Saga Age of Hannibal (AoH).  I already have Iberian and Epirot armies for AoH and wanted to add a Roman army, since historically they fought all the other armies in the AoH book.  I 've also watched several battle reports on Youtbe with Romans (mostly from Graham's Wargame Vault) and wanted to try out their battleboard.

I wanted to build an army that followed the historical organization of a Republican Roman army.  For Saga, that translated into 1 unit of Velites (levies in Saga), 3 units or maniples of Hastati (Warriors), 3 units of Principes (also Warriors), 2 units of Triarii (Hearthguard), and a mounted general.  I've already painted the 4 mercenary options available to the Romans (Cretan archers, psiloi, thureophoroi, and Samnites).  I didn't want any Roman cavalry as they didn't fit how I want to play the army.

Once I knew what units I wanted to include, I looked at several manufacturers to calculate how much it would cost for each one.  In the end I chose Victrix miniatures in plastic.  I ordered the Rome's Legions of the Republic (I) box from Caliver Books.  It has 18 Velites and 42 legionaries in mail, which is how I wanted to depict them.  The only thing missing was a general, so I added a Crusader Republican Roman General pack, which comes with 1 foot and 1 mounted general.  I also bought a pack of 8 Crusader Republican Roman Triarii from Noble Knight.  You can build Triarii with the Victrix box, but I wanted to use all the Victrix for the Hastati and Principes.

I sorted out the parts and made 3 units each of Hastati and Principes, even though they aren't differentiated in Saga.  There are 3 different types of right arms in the set (upright pilum, throwing pilum, and sword).  I decide to use the same type of arm within each unit to give them a more 'regular army' look.  So the Hastati have one unit with upright pila, one unit throwing pila, and one unit with drawn swords.  The Principes have the same organization.  There are 6 different legionary bodies, so only 1 unit has any duplicates.  I saved 2 legionary bodies to use as musicians for the general's stands.  I plan on using the Hastati and Principes in units of 6 to take advantage of the abilities on the Roman battleboard.  There are 40 in total, so 2 of the Hastati units have 8 miniatures in order to make 5 points of warriors for Saga.  I have 6 Velite bodies and lots of spare parts left over, I am sure they will be useful for something else in the future.  I split the Triarii into 2 units of 4 and used some of the spare shields from the Victrix set so that they would match.  I used LBMS shield decals, which come in 2 halves for the scutum so are a bit tricky to cut out and apply.

I started out by painting one unit of Hastati at a time to work out my color scheme.  I gave each troop type a different tunic and shield color/design for aesthetic purposes.  After that, I painted the 8 Triarii, then the 12 Velites, all the Principes at once, and finally the generals and musicians.  It was a fairly quick project for me.  I started painting the week after Historicon on 25 July, and finished at the end of September.  I worked on a few other projects at the same time.  I am very happy with the results, Victrix are nice miniatures and after using them for my Iberians and some of my Epirotes I have gotten the hang of assembling them quickly.  Also with the thickness of the pila I am not concerned about breakage.  It was nice to paint uniforms again.

The mounted Consul or Tribune of my army.  I managed to fit a musician on the base as well. 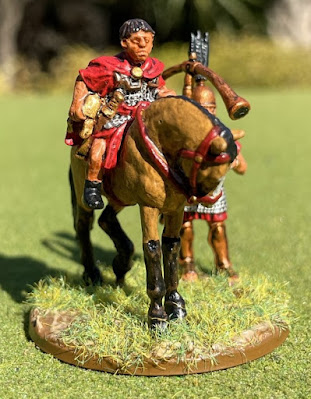 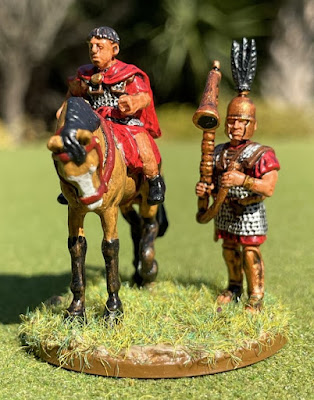 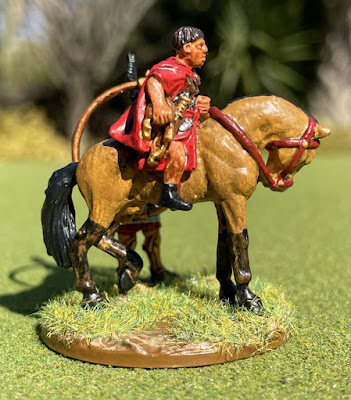 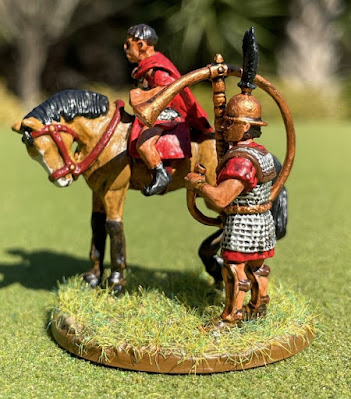 The Consul on foot with another musician. 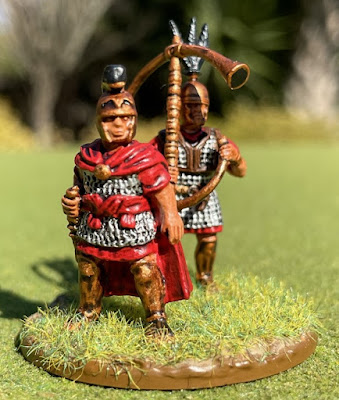 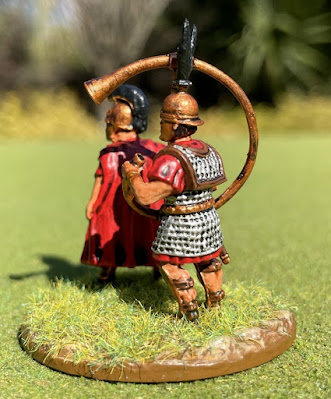 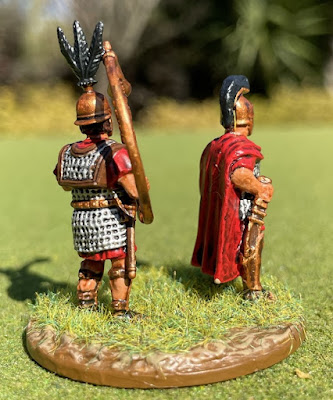 For the Hastati I chose to use white tunics and white shields. These 8 Hastati are throwing pila.

8 Hastati with gladius at the ready.

6 Hastati with upright pila.  This is the only unit in the army with plain shields.  I didn't have quite enough decals so left them plain white.  It makes it even easier to differentiate between units. 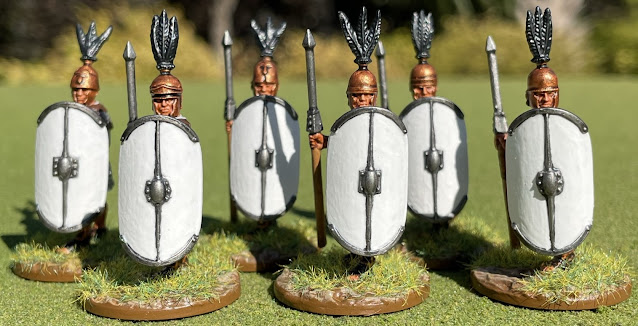 I used red tunics and red shields for the Principes; these 6 have upright pila. 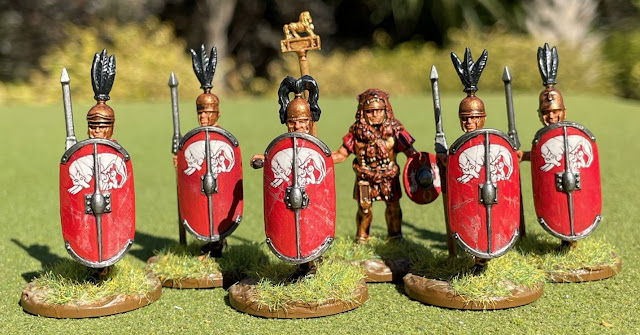 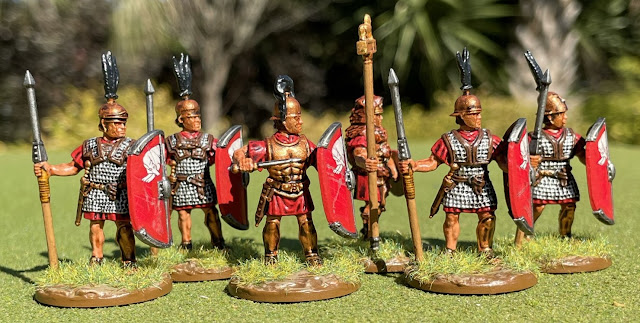 Six Principes with gladius in hand. 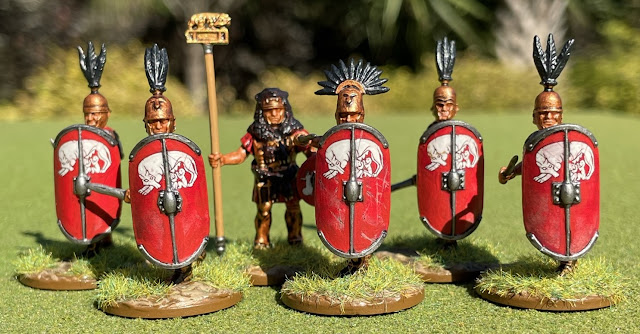 I gave the Triarii red tunics and yellow shields.  This is the first unit of 4 with their traditional long spears.  These are Crusader Miniatures with Victrix shields.  I really like Crusader, they have a wide variety of figures and they tend to mix well with the other manufacturers I use.  There are 4 different poses; the units have 1 of each. 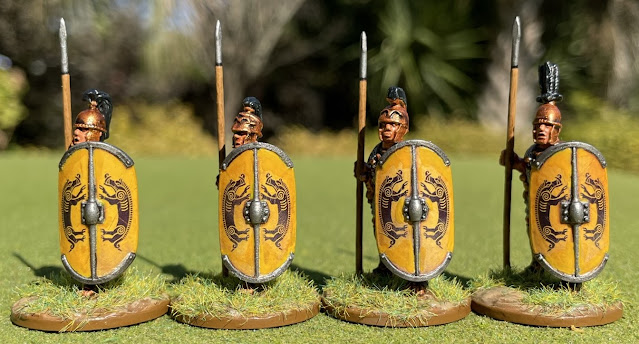 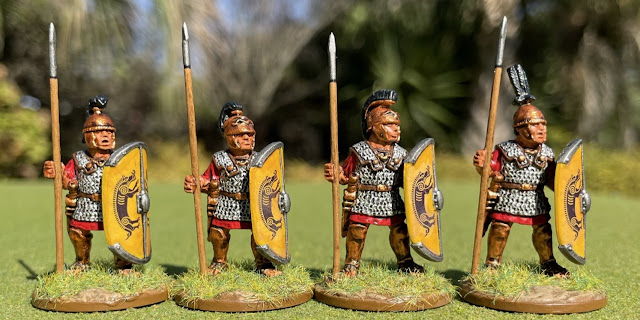 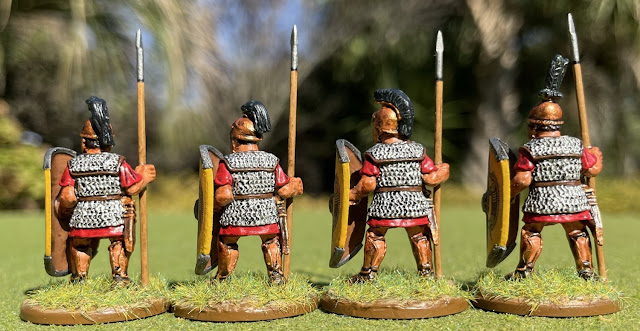 The other 4 Triarii with spears. 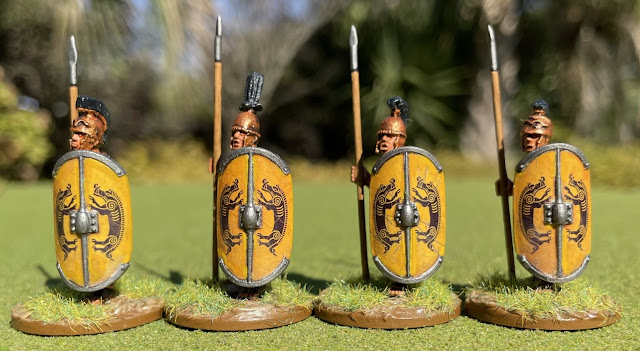 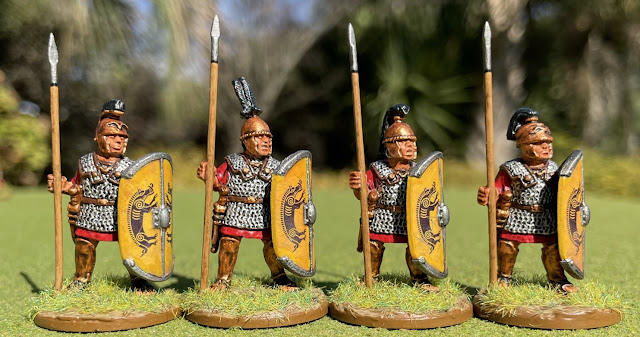 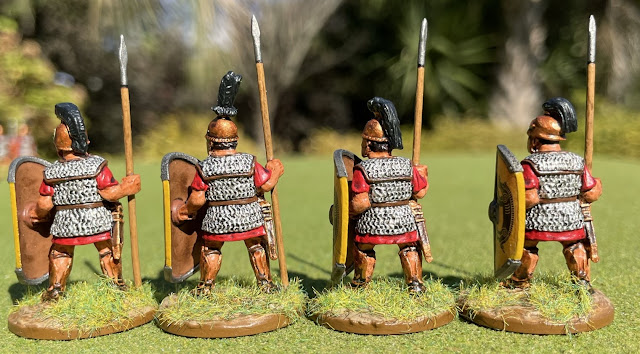 Six of the 12 Velites armed with javelins.  I really like how Victrix models some of them holding extra javelins in their left hand.

The might of Rome, arranged in a rough triplex acies or checkerboard format with the Velites screening the front, and the Hastati, Principes, and Triarii in successive lines.

This a group of 28mm miniatures from Hasslefree Miniatures.  Their website is currently being renovated, so I am not including the catalog names as I normally do.  I purchased these in November 2021 and May 2022 during their sales and painted them in two batches in spring and summer 2022.  I still have a few left that I intend to work on between batches of ancients for Saga.

A father and daughter who have managed to survive the apocalypse. 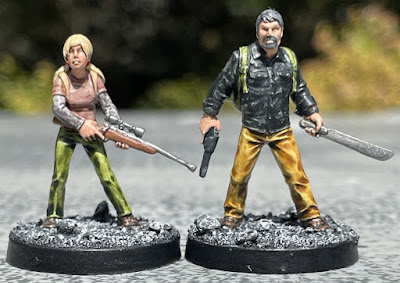 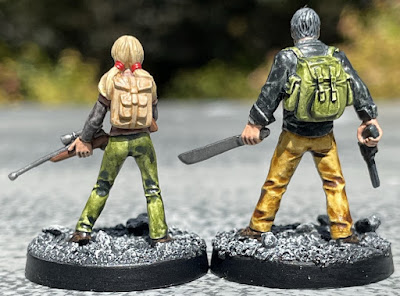 A couple of miniatures for my 7TV games.  A civilian bystander; a heroic strongarm who has a Captain America look to him, so I used blue and red with a lightning bolt symbol instead of a star; and a new member of my biker gang that has been separated from his colleagues. 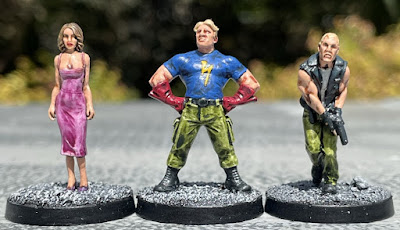 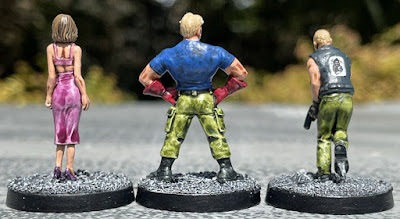 Now on to the living dead.  I experimented with some different skintones this time to add some variety to my zombie horde.  A zombie school girl on the left and a zombie surfer on the right who just isn't ready to leave his board behind. 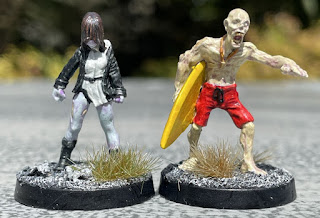 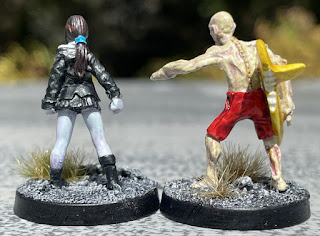 A fresh zombie who isn't ready to let go of her pistol just yet, and my favorite of this batch, the zombie mime.  One of those miniatures that makes me smile every time I look at it.  Deadly because he can sneak up on you without making the usual zombie noises, the quick-witted survivor can save themselves by using the Invisible Wall technique. 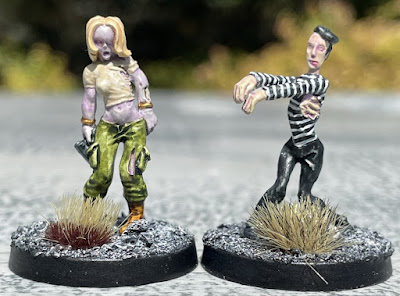 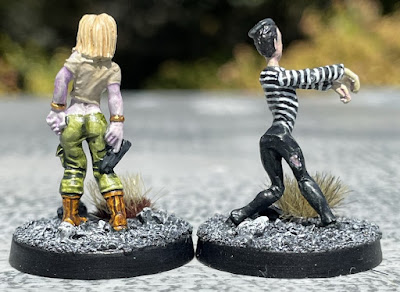 Zombie doctor bitten by a patient and a zombie who appears to be very upset about her current state of existence. 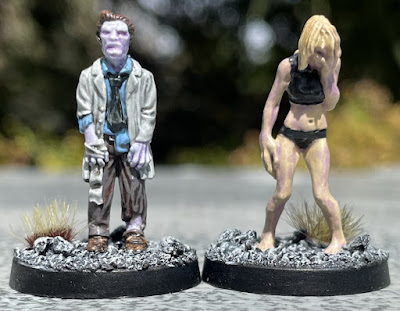 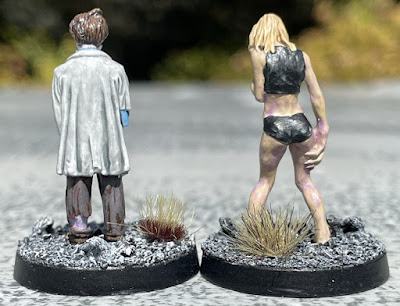 I have three painted 15mm historical armies for sale.  They will be for sale at Historicon on July 21-24, 2022.  I will be in the flea market on Friday afternoon and Saturday morning.  I have comments on this post moderated so if you are interested you can give me your contact details through a comment without it posting publicly.

The Greeks are a Xyston DBA army pack.  There are 5 mounted and 42 foot miniatures.  I believe the pack was Athenian but they would serve for most later Greek armies.  They have Little Big Men Studios decals and the bases have magnets on the bottom.  They have never been used.

The Britons represent the forces of the post-Roman Britain/Arthurian period.  There are 11 mounted and 34 foot miniatures.  They are mostly Splintered Light Miniatures; one stand of cavalry and a couple of the spearmen are Chariot Miniatures.  They have Little Big Men Studios decals and the bases have magnets on the bottom.  They have never been used.

These are Essex Miniatures.  There are 39 foot and 1 chariot.  The bases have magnets on the bottom.