In between big projects I often work on a few figures, a small unit or a piece of terrain for an old army.  Recently I made some additions to my 28mm Viking army that I use for SAGA.

I normally have a standard for each SAGA army I have.  Even though I don't often use them as banner in game terms, I think they look nice and add character to each army.  When I originally painted my Vikings, none of the miniatures was in the right position to hold a spear upright.  I've been on the lookout for a suitable miniature ever since.  I finally bought one by Gripping Beast at Historicon 2018 from Badger Games.  It came with a LBMS banner.  I think he looks suitably stern to be a veteran companion of the Viking leader. 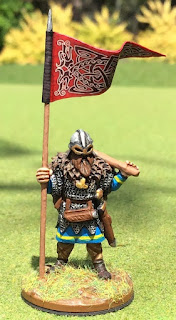 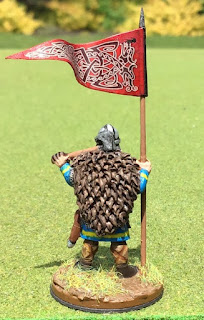 The 2nd edition of SAGA allows a unit of 6 shieldmaidens.  Since I already had 4 that I painted back in 2017, why not get 2 more?    I still needed a leader and a standardbearer.  I ordered them from Brother Vinni in 2018 during one of their sales.  They are made of resin with separate arms that attached easily with superglue.  The standard was harder to attach.  The lower section was part of the arm piece, with the upper section including the banner was separate.  It was too thin to pin, but after trimming some off the lower section I was able to get it to hold together with superglue.  It appears to be a strong join now.  The top section is available separately if you need a new banner. 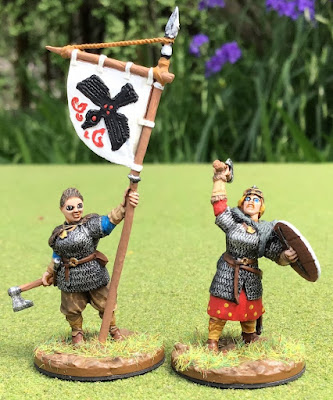 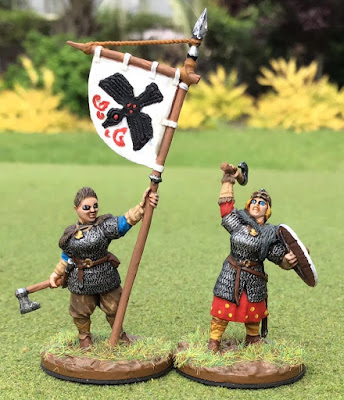 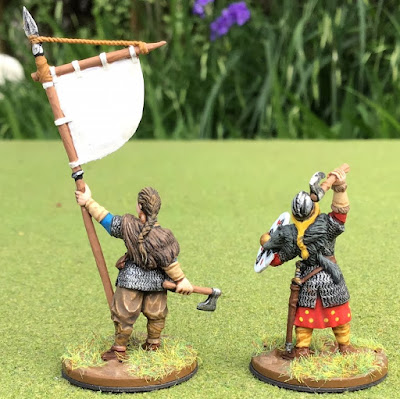 The whole unit ready for battle: 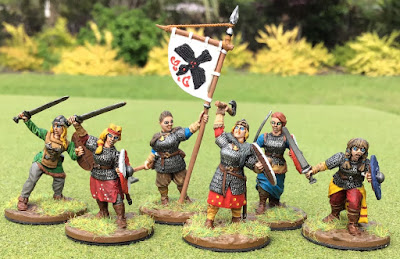 Also recently completed is a Viking ship grave from Acheson Creations.  Cast in resin, my friend Mike bought it for me at a convention and mailed it to me.   I was pleased that when I googled 'Viking Ship Grave' the images were very similar.  The burial site was surrounded by stone slabs in the shape of a ship.  After a quick run though tthe dishwasher to remove the mold residue I spray primed it black.  After that all it took were a few layers of drybrushing.  I added some static grass, shrubs and flowers and voila.  It is a good-sized terrain feature and will give my Vikings something to defend. 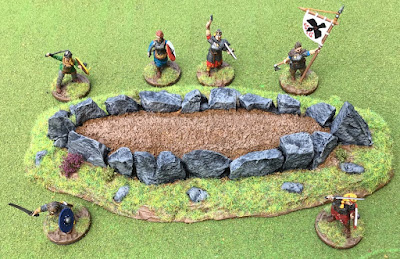 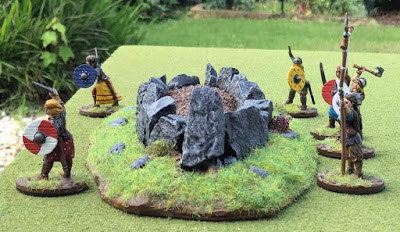 Jason
I am a 46-year-old wargamer in Columbia, South Carolina.