During the Black Friday sales in early December, I was browsing Noble Knight's website looking for things I could add to an order I was making.  I happened across buildings from 4Ground that looked interesting.  I went to the 4Ground website to check if they had more pictures and learned that they had more buildings in the range and were also having a sale.  I bought the Construction Site Tower Block Bundle (all 4 buildings in the range at a discount plus a pack of extra wall panels) directly from 4Ground and soon had packages from both 4Ground and Noble Knight.

4Ground MDF kits come prepainted.  My previous experience with 4Ground buildings was limited to one building I bought at a flea market and assembled years ago.  When I assembled it I did not have a good experience, mainly due to some very fiddly parts for the windows and the plastic meant to represent window glass.  I was willing to give them another try and thought that any issues I might have during assembly would be mitigated by the fact that they were buildings still under construction.  In addition to the construction set I also bought a French butcher shop, two billboards and two vending machines.  None of them appeared to have any of the components that had caused me problems previously.

The appeal of these kits was that I could use them in both a modern cityscape and in a post-apocalypse setting.  As my storage space for buildings becomes scarcer I am having to choose new items carefully and am only trying to buy those that that can serve in multiple settings.  Also, I don't have anything else like them.

I assembled the first of the Construction Site buildings on the evening of January 1st while watching Ohio State play (American) football and did one per evening for the next three days.  I am very happy with the results.  I think these handle stairs better than any other MDF kits I have, both for ease of assembly and the final look.  The one minor issue I had was with some of the internal walls; I had to cut some of them down a bit in order for the next floor to sit properly on top of the internal walls and outer beams.  I didn't use any of the extra wall panels in order keep more access to the interior.

The bases are all 14x14 cm or 5.5 inches.  There were several ladders included but I did not use them in the photos.  The miniatures included to show the scale are some 28mm military contractors from Eureka Minatures and a Hasslefree Miniatures 28mm Kat (HFA004, inspired by Selene from the Underworld movies).  As always, click on the photos for larger versions. 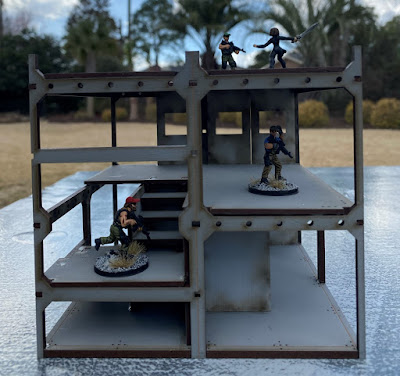 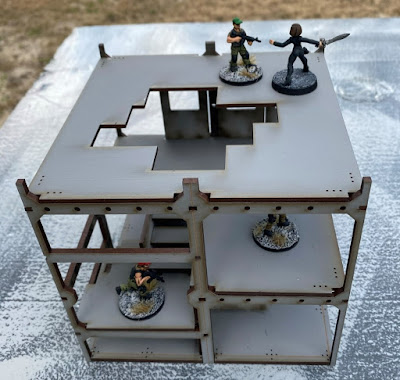 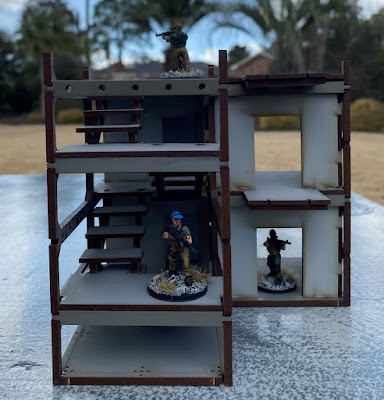 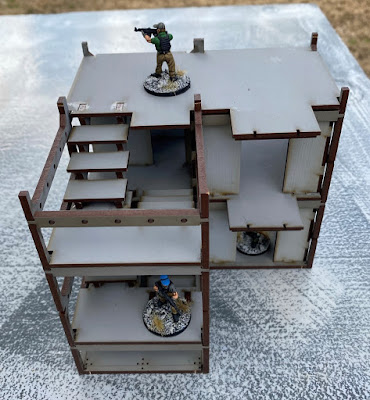 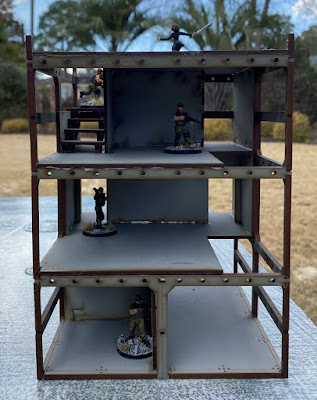 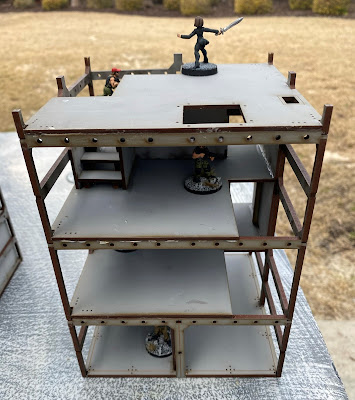 The Construction Site Tower Block Booster can be used on its own or to give one of the other buildings additional height. 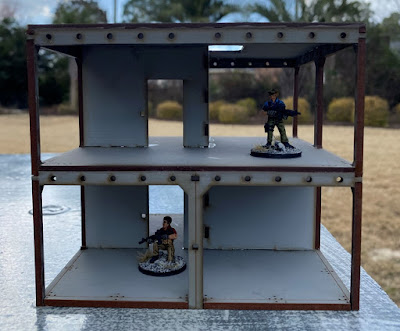 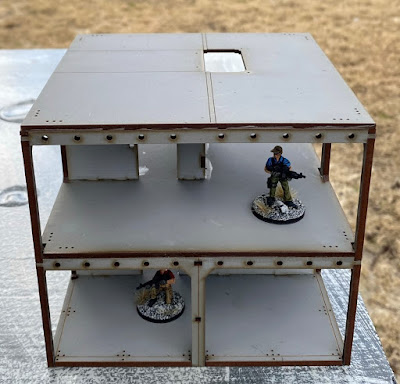 Laying out all 4 buildings in a row gives me 56 cm / 22 inches of terrain, which is a great addition to my game layouts.

A more vertical setup with the booster on the right under the L-Shaped Block. 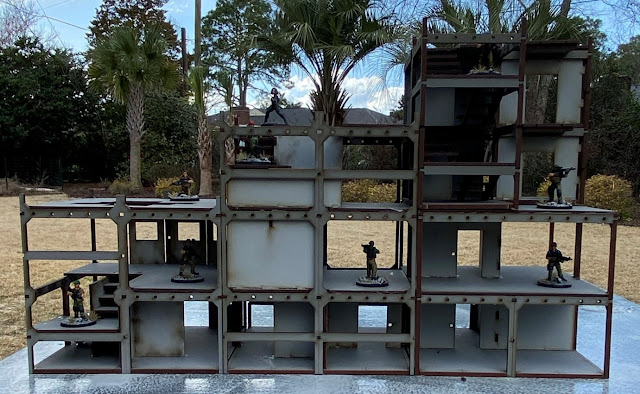 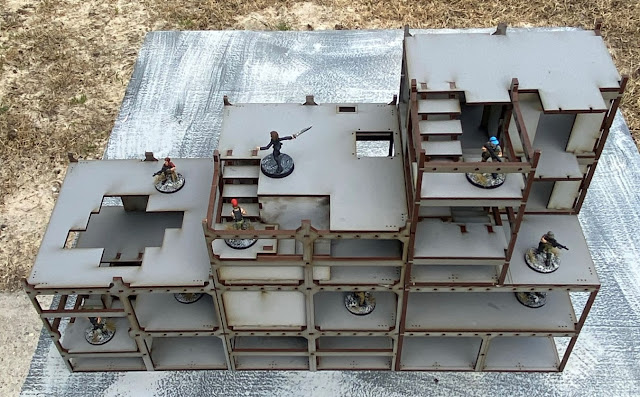 I also got two billboards for my cityscape: (l) Large Billboard with Platform, (r) Billboard.  The smaller one will fit nicely on top of a building.  They come with a selection of premade signs.  I made my own signs to continue my practice of using business names from my hometown of Columbus, Ohio.  Most of the time I pick places around the Ohio State University campus during the 1980s-1990s.  In this case the Newport Music Hall, where I went many times for concerts and is still around.  The Taj Mahal restaurant now exists under the name New Taj Mahal for reasons unknown to me.  Both of these were very easy to assemble. 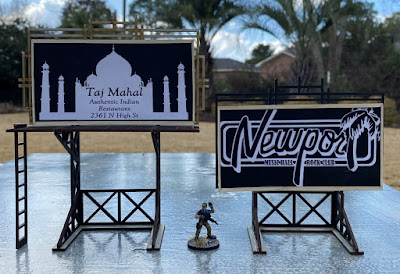 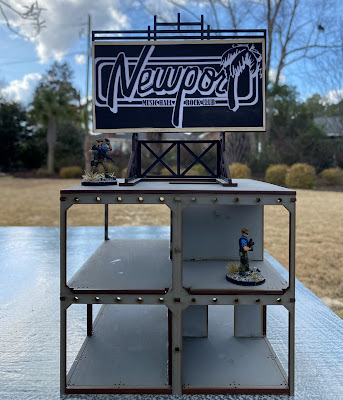 The Butchers Shop kit was very inexpensive.  The reason is that it does not have a detailed interior or a base.  The instructions also have the roof glued on.  I like to be able to use the interiors of my buildings, so I added a base made of black styrene and gave the inside a quick coat of off-white craft paint and added a floor using scrapbook paper.  It was easy to glue some of the triangle-shaped scrap MDF pieces to the underside of the roof to give it more stability.  The kit includes a 'Boucherie' sign, but as noted above, I like to have building signs from my hometown of Columbus, Ohio.  So after some consultation with my Columbus gaming friends , I decided to make a Carfagna's sign in honor of an Italian market that I used to visit with my parents and is still open.  This kit also included a red and white awning that I did not use. 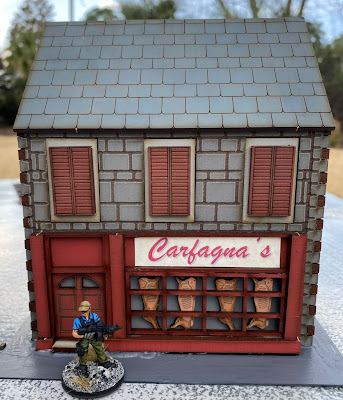 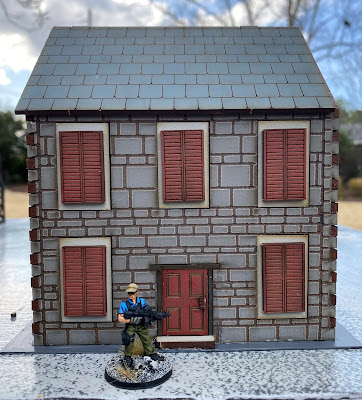 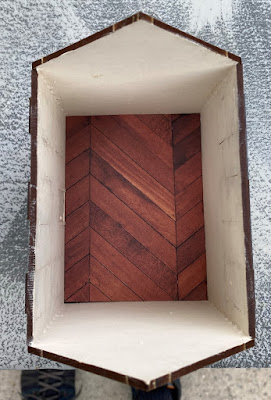 Even mercenaries get hungry!  These Grey Vending Machines come as a set of two.  Included with the kit are detailed paper covers with a variety of drinks and snacks.  Very easy to put together. 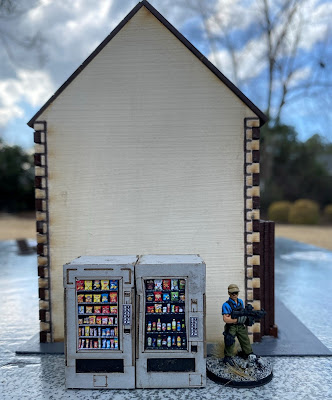