When my copy of Age of Hannibal, the new Saga army book, arrived last fall, I spent a lot of time thinking about what army I wanted to build.  No matter which I chose I would have to start from scratch.  Although I have a large collection of 15mm ancients, I didn't have any in 28mm.  Going by historical interest my first choice was the Epirotes led by Pyrhhus.  However I had some doubts about the viability of the army due to its slow movement and battleboard abilities.  I was also interested in the Iberians.  Their battleboard interested me with the Guerilla mechanic and I do not have another Saga army that relies on maneuver abilities and the use of terrain.  They also have some nice combat abilities  I explored the miniature options for both over a couple weeks and eventually made the classic wargamer's choice:  I bought miniatures for both!

After receiving everything for both armies from Caliver and Aventine I decided to paint the Iberians first.  I had worked out that I could build most of the army with one pack of Victrix Armoured Iberian Warriors (40) and two packs of Victrix Iberian Cavalry (12 each).  I supplemented them with two command packs from Crusader: Spanish Caetrati Command and Lusitanian Warrior Command (4 each).  Crusader are one of my favorite companies for Saga miniatures and have a wide range of offerings.

This was my first time building an entire army out of plastics.  After some experimentation with the first groups of infantry and cavalry, I found the assembly process fairly easy.  The main reservation I have about these figures is the fragility of the weapons.  Several times during painting the first unit  I broke javelins with only a small amount of pressure.  They always broke at the hand and were easy to repair with plastic glue, but I consider it a real drawback compared to the metal figures I normally use.  I have some doubts as to their long-term durability but I am happy with how they turned out and hope they last.  I look forward to playing them when I have a chance.

I used a limited color palette for the Iberians.  I have a 15mm Ancient Spanish army that I painted many years ago (also posted on this blog), and after looking at them and consulting my copy of Duncan Head's Armies of the Macedonian and Punic Wars (an invaluable resource), I had the basic scheme: tunics in various shades of off-white with red borders and a few blue borders.  Some tribes wore black, so I would use that to add in some variety.  I used a slightly darker skintone than I use for my Viking Age armies, reasoning that my troops would spend much of their time outside in the Mediterranean sun.

The first group I painted was a unit of 12 caetrati, skirmishers armed with javelins and the small caetra shield (levies in Saga terms). If I don't want to use them as levies, they could also pass for Lusitanian scutarii who historically used the caetra shield.  Four of them are Crusader miniatures with Victrix shields substituted so I could use the LBMS transfers I had: in the first group the only one with a sword; in the second group the one pointing ahead, the standardbearer and the hornblower.

I have three units of 8 scutarii armed with a mixture of spears and swords (warriors in Saga).  Two of the units have the same range of off-white tunic colors so I differentiated them by painting their helmet crests either black or red.  The group with black crests has 2 miniatures from the Crusader Lusitanian Command pack: the hornblower and the officer near the center with a sword and 3 plumes.  The third unit of scutarii has black tunics and represent an allied tribe. 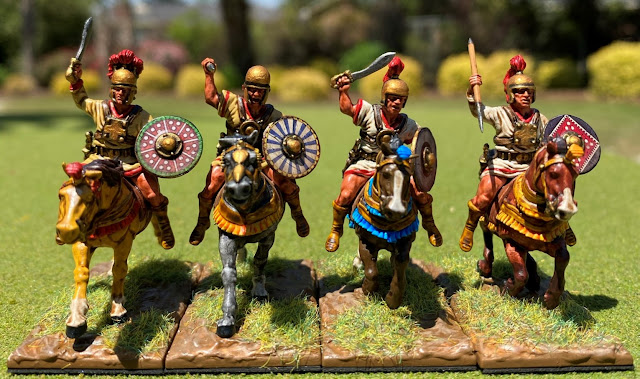 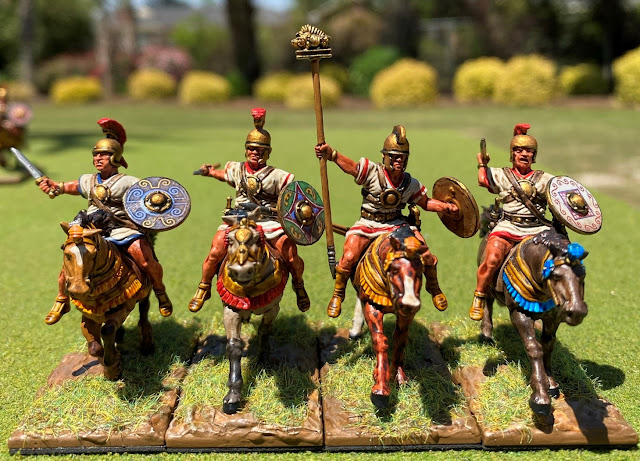 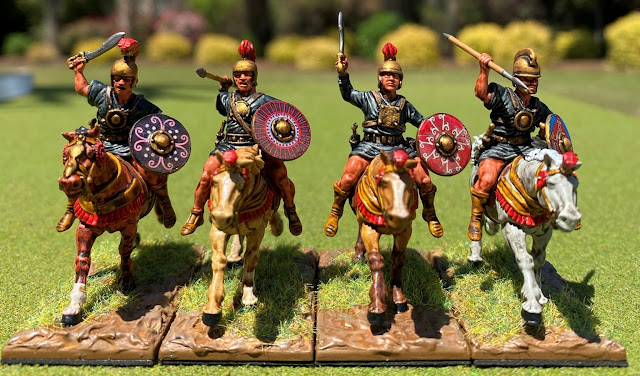 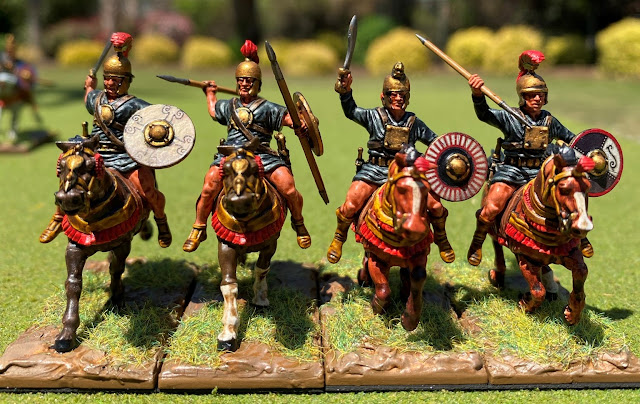 I wanted to have some tougher cavalry for a strike force, so painted a unit of 4 as nobles (mounted hearthguards in Saga).  They are distinct from the rest of the cavalry with red tunics, white or gray cloaks with a red border and larger shields. 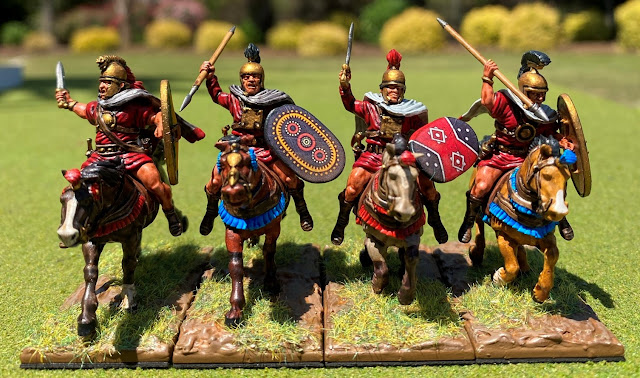 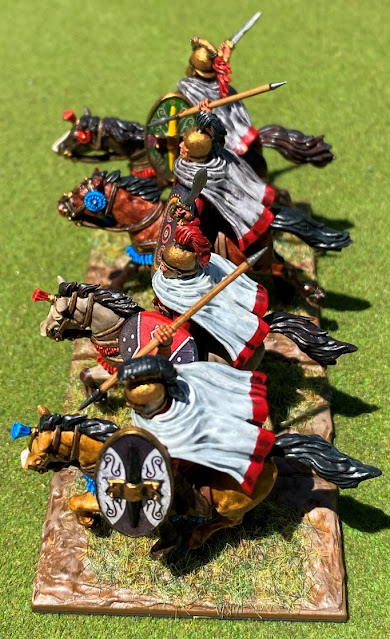 I spent a lot of time thinking about what to use for my warlord.  When initially looking at options for buying the army I didn't see any miniatures that fit what I wanted for a warlord, so I decided to wait until later.  It turned out that I had enough foot to spare two for a warlord base.  Looking at the Crusader command miniatures I already had, I chose one of the leaders and the standardbearer from the Lusitanian command pack.  They both had scale or mail armor and greaves, while the leader had a cloak and the only beard in the entire army.  I gave him a red tunic and a white cloak with a purple border, using some of the same colors as the rest of the army but with some added color. 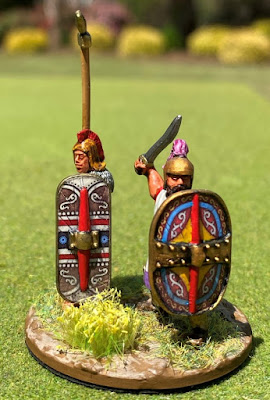 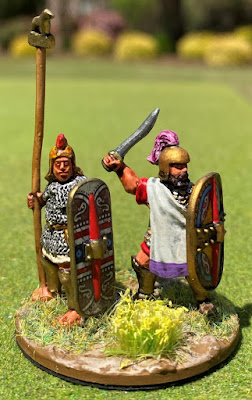 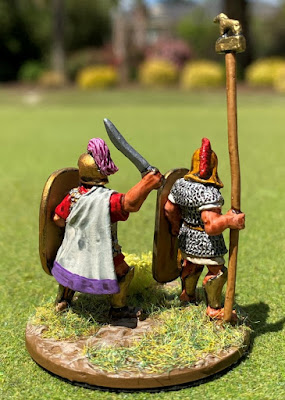 For a mounted warlord I had fewer options.  I only had the Victrix cavalry, but there were only three different bodies so I decided to attempt a conversion (one of my least favorite things to do).  I cut off the torso of a plastic foot command pose and cut one of the riders in half.  I glued the two parts together and was able to conceal the join.  None of the cavalry heads looked distinctive enough to me, plus I had used at least one of each of them for the other cavalry.  I ended up taking a head from the Macedonian phalangite set with side crests, removing the central Thracian peak from the helmet, and gluing on a central crest from the Iberian set.  Painting him in a mix of red and purple tones also makes him stand out from the rest of the army.  My general must have gotten his elaborate helmet as a gift from a Carthaginian envoy seeking an alliance.  Buying the Epirotes at the same time was obviously the right choice! 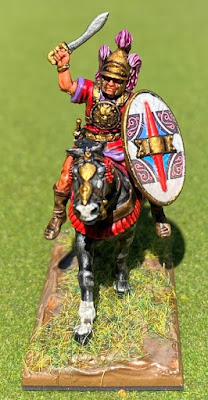 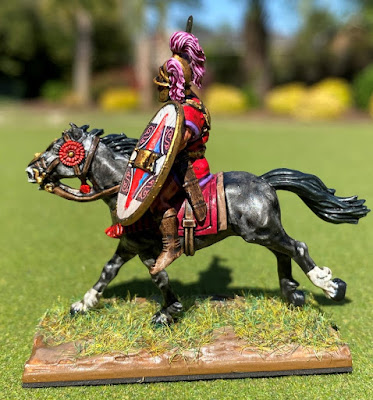 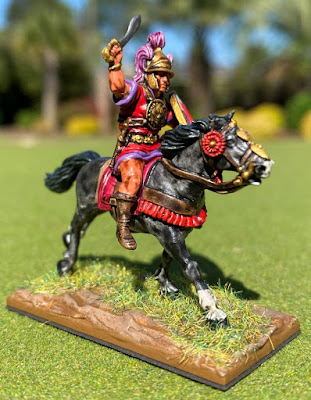 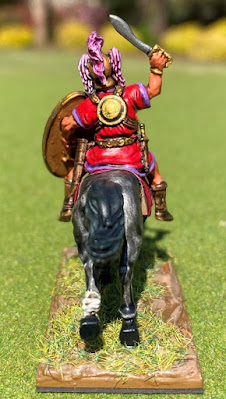 The entire army drawn up for battle:  Caetrati in a screen out front with scutarii behind, cavalry to each flank and the noble cavalry in reserve.  The completed army has 7 points for Saga.  I have enough extras to make another unit of scutarii so may add those in the future but am done for now.  The Iberians have the option to arm their warriors with slings but the Victrix sets don't include any.  I do have a unit of Baelaric slingers on my painting desk now that I can use as Iberian warriors or more likely as a mercenary unit.