Recently I was looking for a quick project.  I had just finished painting a Viking army for Saga and next on the list was resuming work on my successor phalangites.  In between I wanted to do something small that wouldn't take more than 1 week.  I decided to fix up my 28mm motorcycle gang.
My motorcycle gang has a convoluted history.  Back in March 2020 I realized that my vision had started to deteriorate and my detail painting was suffering.  Just before everything shut down due to COVID, I bought a pair of reading glasses for use during painting and they solved the problem.  I also realized that some of my recent projects had suffered, the bikers among them.  I originally painted my bikers in summer 2019 and they were not up to my usual standard due to the aforementioned vision issue; this project gave me the chance to correct that.
A motorcycle gang is one of those groups that frequently appear in modern and post-apocalypse settings, so I would be able to use them in multiple games.  I started collecting the miniatures some years ago with the plastic Warlord Games Project Z Biker Gang sprues, which were originally made by Wargames Factory.  They have been out of stock for a long time as the game appears to have been abandoned.  I bought one each of the sprues; together they had enough parts to make 4 on foot and 3 on motorcycles.  One thing that disappointed me is that only 1 of the Warlord bikers is wearing a leather jacket.

The rest of my gang came via the 2017 Kickstarter for Turf War Z, which I received in early 2018.  These metal miniatures are now available through Studio Miniatures as a set of 7 and a separate leader; The set of 7 has 1 complete miniature and 6 bodies (3 each of 2 different poses) with separate heads and arms.   Included were extra heads and arms to allow for customization.  Most of the heads are clearly inspired by characters from the Sons of Anarchy tv show, which of course I watched during some painting sessions.  After taking stock of all the pieces I had and some test fittings, I assembled them all at once.  I pinned most of the heads and arms to secure them better.

The color scheme is pretty simple.  Lots of leather jackets and jeans, with shirts mostly in dark shades.  I added some different colors here and there for variety.  A lot of the Warlord minis are wearing leather chaps for some reason.  On initially painting these miniatures in 2020, I came up with a gang logo with the help of Google Images, then printed decals on white decal paper.  The design didn't come out as distinct as I had hoped but I used it anyway.
The repainting project consisted of redoing the areas that looked the worst.  This included removing the original decals and substituting Sons of Anarchy decals that Studio Miniatures now sells, re-lettering the backs of the jackets, repainting the eyes, and touching up anything else I didn't like.  When lettering the backs of the jackets I used 'Sons' for the gang name and 'Nomads' for the chapter.  Honestly I don't think I could fit more letters than that.  The minis with decals are full members.  those without decals are prospects or hangers-on.
I also made some additions as part of this project.  When I was assembling plastic zombies in summer 2020, I had some parts leftover.  I noticed recently that the Studio Miniatures zombie sprues had a body wearing a leather jacket.  I wondered if I could use them as living bikers.  I took three of them and added leftover biker heads, arms and weapons from the Warlord biker sprues.  To add some variety, I cut one body off at the waist and used the Studio torso with a Warlord lower body.  The Warlord sprue also had a female motorcycle passenger that I hadn't used.  I cut it at the waist and used a set of extra Warlord legs to make a fourth new miniature.  A quick paintjob later and I had 4 new gang members.
One week later and this project was complete and my 21-member motorcycle gang is ready to go on the table.  I am finally happy with how they look and already have some scenario plans.  It would be nice to have some motorcycles for scenery.  If you know of a source, let me know in the comments.
Three of the Studio Miniatures.  When I did the lettering I used the smallest brush I own.  It isn't perfect but at least it's legible. 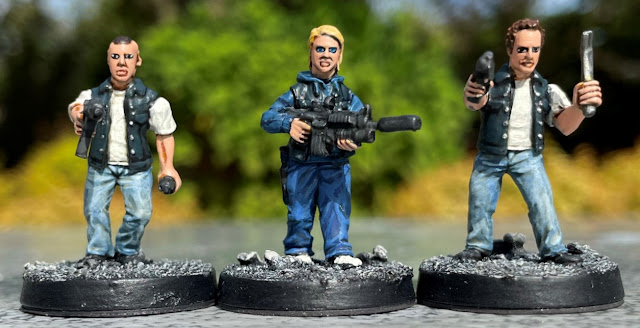 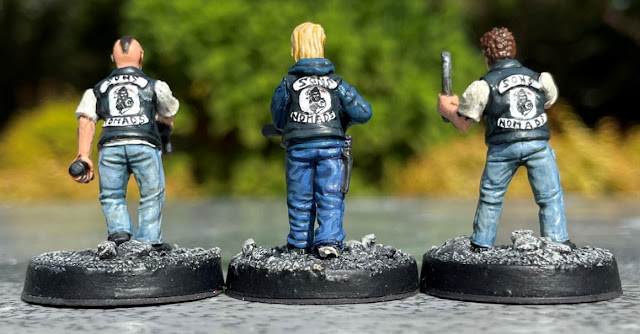 The chapter president and a chainsaw-wielding biker ready for close combat (Studio). 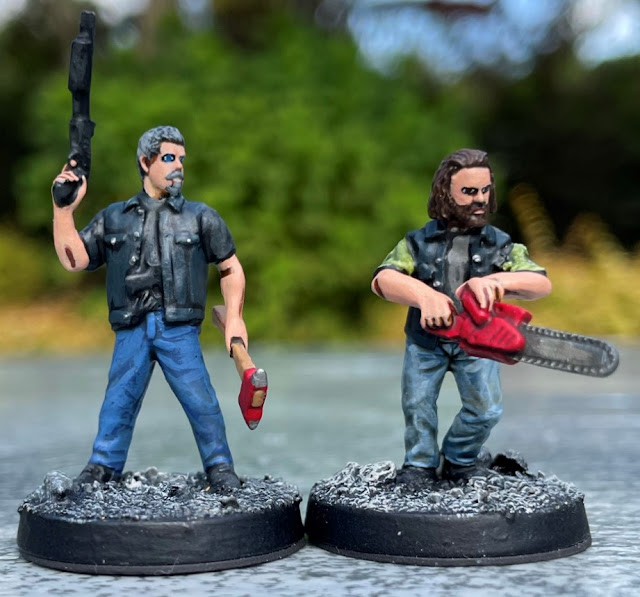 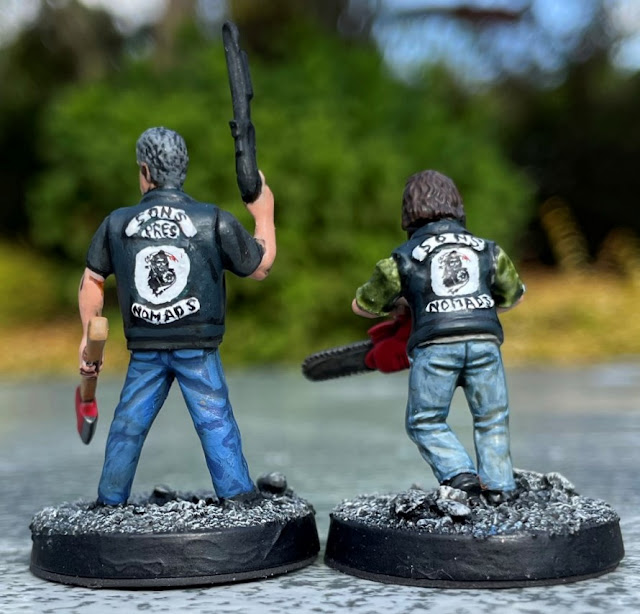 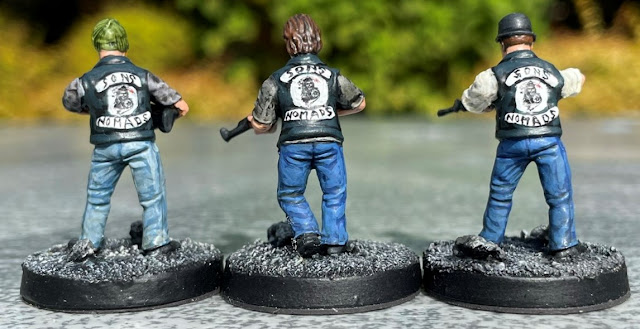 The Warlord motorcycles had a lot of parts to glue together  but they turned out well. 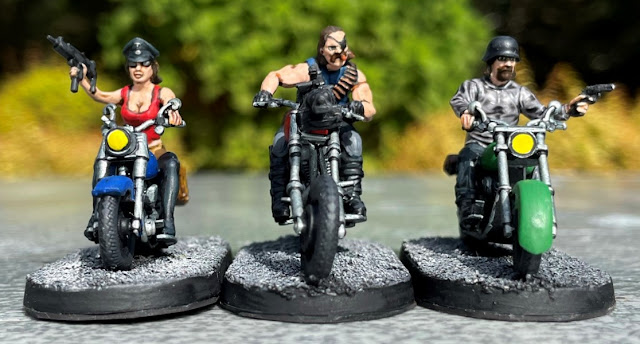 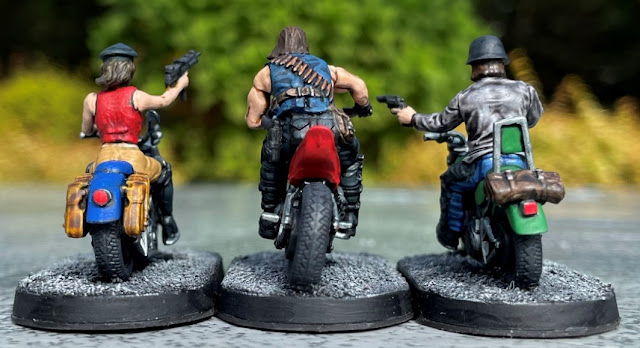 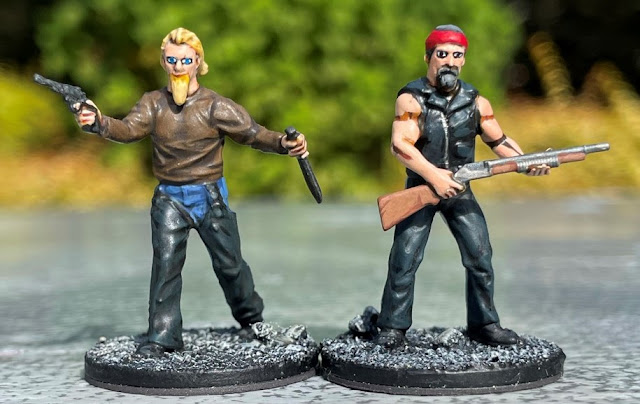 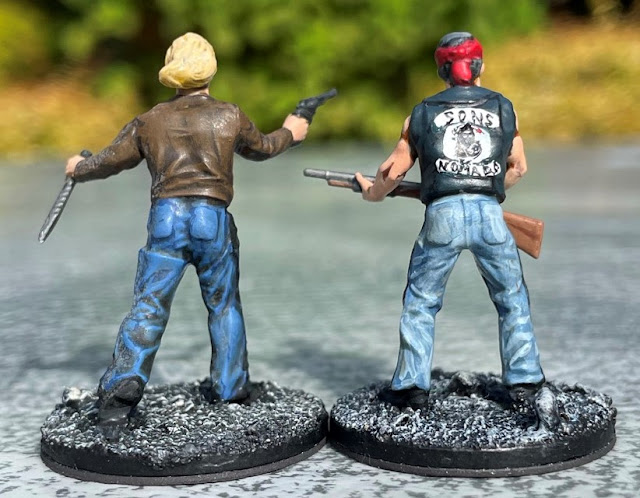 The ladies of the chapter are ready for a fight.  The one in the middle was originally a motorcycle passenger.  Those chaps don't look comfortable for riding! 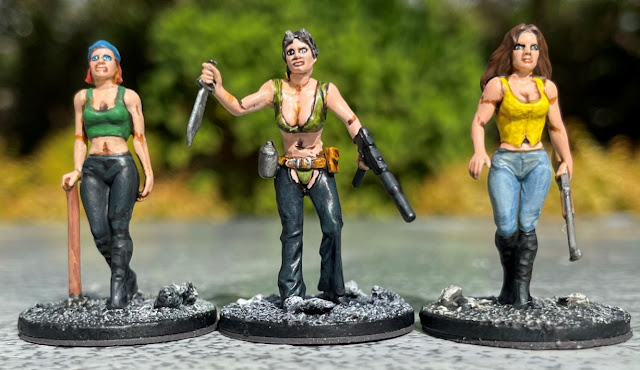 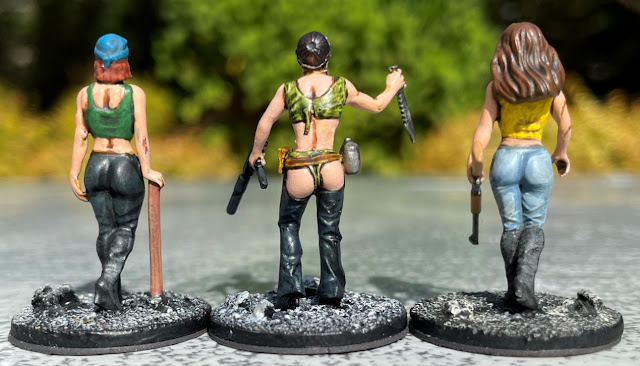 These are the ones I converted from Studio Miniatures plastic zombies bodies with Warlord heads and arms.  The one on the right also has a Warlord lower body which made it taller than the other two. 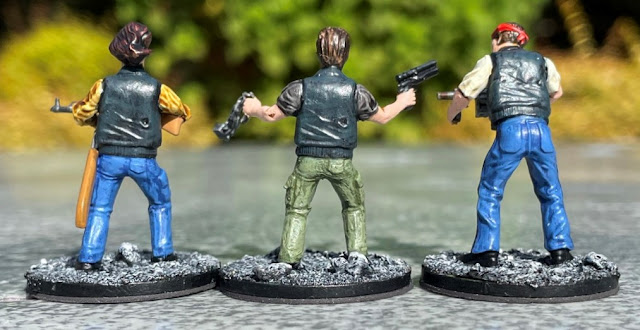 I already had these 2 in my post-apocalypse collection and they fit right in with the rest of my gang.  Made by Project Zeke Miniatures which had a small post-apocalypse range but is no longer in business. 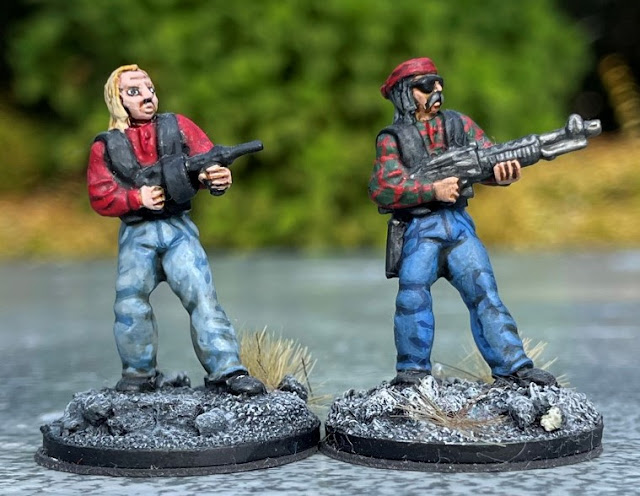 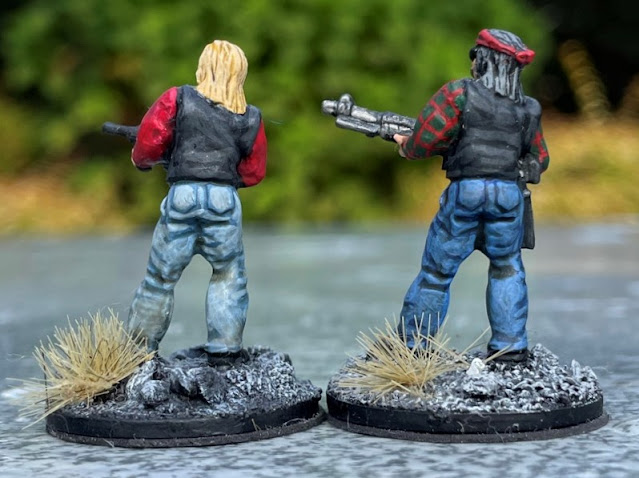 A size comparison: (l-r) Studio metal, Warlord, Studio plastic zombie, Warlord, Project Zeke.  The Studio metal is on a thicker base so the overall height looks better.  Note all the Warlord female minis are very tall.

The entire gang assembled and ready for action.